Lost 2 consecutive matches in the year 2010, India almost out of T20 World Cup semi-finals after 9 years

That was the year 2010 when India had lost two or more matches in a row in the T20 World Cup and missed out on a place in the semi-finals. After this, in the 2012 World Cup, India defeated Pakistan and South Africa, but the net run rate screwed up that India could not make it to the semi-finals.

India’s loss to Australia in the 2012 T20 World Cup was such that it had to beat South Africa by a huge margin to improve its net run rate. In the end, India were knocked out of the tournament after winning by just 1 run over South Africa.

Although he was seen fighting at least India in the World Cup, in this World Cup only he was seen surrendering. First a big loss against Pakistan by 10 wickets, followed by an 8-wicket defeat against New Zealand just a week later, the doors to the semi-finals are almost closed for India.

After losing 2 matches in a row, the doors of T20 World Cup are almost closed for India. Even if Afghanistan beat New Zealand, their net run rate is very high as they beat Scotland by 130 runs and then Namibia by 60 runs today. 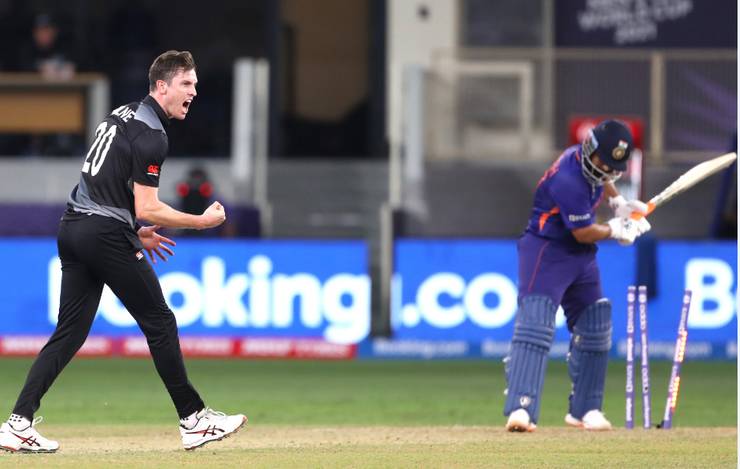 what happened in today’s match

New Zealand thrashed India by eight wickets in a one-sided fashion in Group Two of the ICC T20 World Cup on Sunday with a stellar performance from their bowlers to cement their claim for a place in the semi-finals. India’s dream of going to the semi-finals has almost been shattered with the second consecutive defeat.

Team India’s entire batting line-up failed miserably. Any team wins T20 match on the basis of fearless batting. Such teams do not get success, which cannot hit any boundary between the 7th to the 16th over. Very disappointing game for Team India! SabseBadaStadium #IndVsNZ

After restricting India to a modest 110 for seven in 20 overs, New Zealand scored 111 for two in 14.3 overs to register their first win in two matches.

Jasprit Bumrah dropped both New Zealand wickets. Bumrah got Martin Guptill caught by Shardul Thakur. But Daryl Mitchell then put on a match-winning partnership of 72 runs in 54 balls for the second wicket with captain Kane Williams.

Bumrah broke this partnership by getting Mitchell caught by Lokesh Rahul. Mitchell hit four fours and three sixes in his 49 off 35 balls. Devon Conway came out to support Williamson. Both gave New Zealand victory in 14.3 overs. Williamson hit three fours in 33 not out off 31 balls while Conway remained unbeaten on two. For India, Bumrah took two wickets for 19 runs.

With all the talent and resources available, this tournament is probably the worst performance in the history of #TeamIndia Extremely sad. #INDvNZ

New Zealand won the toss and decided to field first. India fielded Ishan Kishan in place of Rohit Sharma along with Lokesh Rahul in the opening. Kishan hit a four in eight balls but in an attempt to hit a big shot, he was caught at the boundary to Daryl Mitchell. India’s first wicket fell on the score of 11.

Rohit Sharma, who landed as the third batsman, hooked the bouncer of Trent Boult as soon as he came but the fielder standing on the boundary dropped a simple catch. However, Rohit could not take advantage of this life and scored 14 runs in 14 balls with the help of a four and a six and was caught by leg-spinner Ish Sodhi on Martin Guptill. There were high expectations from captain Virat Kohli but he became Sodhi’s second victim after scoring nine runs in 17 balls without any boundary. Sodhi became the player of the match on his birthday.

With all the talent and resources available, this tournament is probably the worst performance in the history of #TeamIndia Extremely sad. #INDvNZ

Wicketkeeper Rishabh Pant scored 12 runs in 19 balls without any boundary and was bowled by Adam Milne. Pant’s wicket fell on the score of 70. Hardik Pandya did not play any big shot and scored 23 runs in 24 balls with the help of a four and was caught by Trent Boult to Guptill. Shardul Thakur could not open his account after playing three balls and was caught by Guptill on the ball of Boult. Ravindra Jadeja scored 26 runs in 19 balls with the help of two fours and a six. Jadeja got life on the last ball.

For New Zealand, Boult took three wickets for 20 runs and Sodhi took two wickets for 17 runs while Tim Southee and Adam Milne got one wicket each.