Indian batsmen did not take runs off 54 balls, jokes on social media

Dubai: On paper, the world’s strongest Indian batting order was badly shattered in front of disciplined bowling of New Zealand and Virat Kohli’s team could only manage 110 for seven in the ‘quarterfinal’ match of the ICC T20 World Cup.

New Zealand captain Kane Williamson’s decision to bowl after winning the toss proved to be correct. India’s batsmen played irresponsible shots and the hunger to score runs was not visible within them. After losing to Pakistan by ten wickets in the first match, it was a do-or-die match for India to remain in the race for the semi-finals.

Most of India’s batsmen were dismissed with easy catches in the deep. There were 54 dot balls in the Indian innings, ie runs were not scored in nine overs. There was no fault in the pitch but the Indian team was once again dodged in the matter of selection. Not trusting the in-form players cost the team management dearly.
Due to this, the fans of the Indian team had to face tremendous trolling on Twitter.

Anyone? Which match was that? pic.twitter.com/edgcBPMEX4

The biggest setback for India was the poor form of both Rohit Sharma and Virat. The middle order also could not work and Hardik Pandya failed as a batsman in such an important match. Indian batsmen, who were considered masters in playing spin bowling, got caught in the web of spin. India’s score was 40 for three in eight overs and the powerplay batsmen could not take any advantage. Ishan Kishan tried to play a big shot to Trent Boult but Santner caught him at deep square leg boundary.

KL Rahul (18) hit two fours but he did not look comfortable during the 16-ball stay at the crease. In an attempt to play a pool shot off Tim Southee’s short ball, he was caught by Santner. Adam Milne gave life to Rohit Sharma (14) at backward square leg. After that he hit him for a six. However, in an attempt to play the same shot to Ish Sodhi, he was caught by Martin Guptill. Kohli was caught by Sodhi on the boundary line at the hands of Boult. Pandya and Rishabh Pant failed. 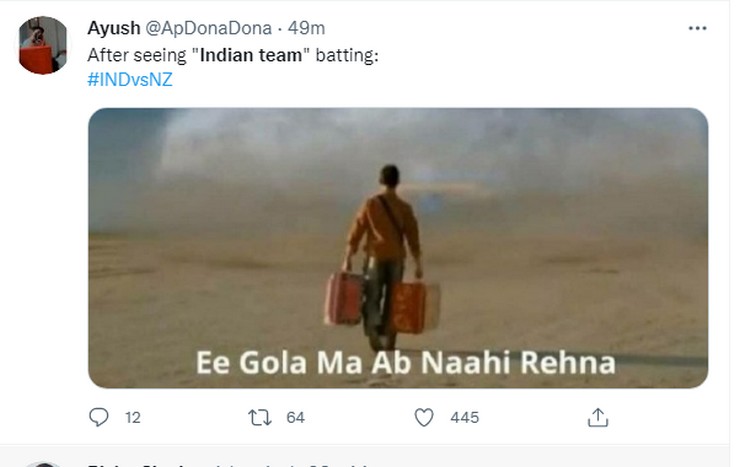