Team India made the biggest score of this T20 World Cup on Choti Diwali, scored 210 runs against Afghanistan

Electing to bat after losing the toss, the Indian team made a big bang on Choti Diwali today. The Indian batting, which had flopped so far in the tournament, was seen in a different color and from the openers to the finishers, no one spared the Afghan bowlers.

Fifties from Rohit Sharma and KL Rahul and a century partnership of the first wicket between the two helped India score 210 for two in the Super 12 stage match of the ICC T20 World Cup against Afghanistan on Wednesday, the highest score of the current tournament. Is.

Hardik Pandya (35 not out in 13 balls, four fours, two sixes) and Rishabh Pant (27 not out in 13 balls, one four, three sixes) put on a formidable 63-run partnership in 3.3 overs for the third wicket as India took the lead. Scored 119 runs in the last nine overs. In this do or die match, none of the Afghanistan bowlers could trouble India’s batsmen.

Afghanistan captain Mohammad Nabi won the toss and elected to bowl, after which Lokesh Rahul and Rohit Sharma gave India a quick start. Rohit also hit left-arm spinner Sharafuddin Ashraf for a boundary in the first over of Nabi. Rahul also hit sixes and fours off consecutive balls of Sharafuddin. 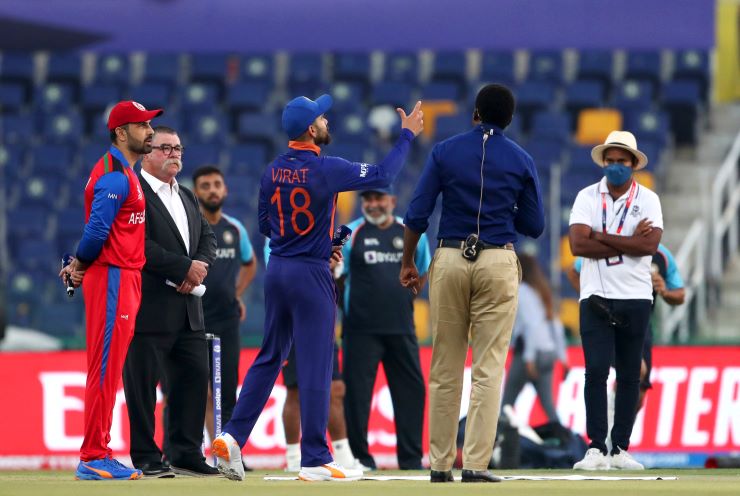 Rohit scored 17 runs in the fifth over with two fours and a six off fast bowler Naveen-ul-Haq and took the team’s score beyond 50 runs. India scored 53 runs in the power play without losing a wicket, which is their best performance in the tournament so far.

Rohit and Rahul did not have any problem in rotating the strike in the middle overs as well and both did not hesitate to teach a lesson to the bad ball.

Rohit completed his fifty in 37 balls with a four on Naveen in the 12th over. Rahul took the team’s score beyond 100 runs with a six in the same over. 16 runs were scored in this over.

In the next over, Rahul completed his half-century in 35 balls with a four on Gulbadin. Rohit hit two consecutive sixes on star leg-spinner Rashid in the 14th over.

To break this partnership, Nabi gave the ball to Karim Janat (one wicket for seven runs) in the 15th over. Rahul welcomed the fast bowler with a boundary but Rohit gave the catch to Nabi at extra cover. Gulbadin (one wicket for 39 runs) then gave India the second blow by bowling Rahul. Rishabh Pant showed his attitude with two consecutive sixes in the same over while Hardik Pandya hit three fours on Hamid.

Najibullah Zadran dropped the catch of Pandya in Naveen’s next over. Taking advantage of life, Pandya scored 19 runs on Naveen with two sixes. This fast bowler gave away 59 runs in four overs.