Hasan Ali’s wife, who dropped Wade’s catch, is an Indian, being called a traitor on social media

Dubai: Pakistani fast bowler Hasan Ali has been trolled on social media after he dropped the catch of Australian batsman Matthew Wade in the semi-final match of the ongoing T20 World Cup 2021 here on Thursday. People are taking various digs at not only him but also his wife who is Indian.

Some trollers have even written filthy abuses on social media about Hasan being a Shia Muslim and his Indian wife Samia Arzoo. Hassan is being called even a traitor in Pakistan. Some even tweeted and said that shoot Hasan as soon as he comes. However, in this difficult time, many people are also supporting Hassan.

Hasan Ali started trending on Twitter after being abused. It was probably a trend run by Indian Twitter handles. Like after the abuses meted out to Mohammed Shami, support by Pakistan was seen on social media. This too was seen as a response to something of his own.

We are very pained to know that #Pakistan Cricketer #HasanAli(@ RealHa55an) is being targeted for being a #Shia Muslim & also because he married an #Indian Samiya Arzoo. Pakistanis’ intolerance & hatred is despicable & I hope @ImranKhanPTI gives enough security. #INDwithHasanAli pic.twitter.com/vyTtNMsuNe

Given the kind of vicious threats that he has received, Pak cricketer Hasan Ali should immigrate to Iran.
He and his Indian wife are not safe in Pakistan.
Is anybody safe in Pakistan?#INDwithHasanAli

Why Sunni Muslim Shaheen Afridi not being trolled for giving 21 runs in penultimate over with 3 Sixes hit by Wade? Because Hasan Ali is Shia Muslim & his wife is Indian.

Shame on Pakistan, Pakistan Cricket & Pakistanis for not standing with Hasan#INDwithHasanAli#PKMKBForever

The kind of pressure, struggles & sacrifices a player has to go through for his country & his people is immeasurable. @ RealHa55an is a star & indeed a good Cricketer.

One of them is also the captain of the Pakistani team, Babar Azam. Babar said during the press conference after the end of the match, “It is the players who leave the catches, so I will support them. He is our main bowler. He has won many matches for Pakistan. Not every single player can perform every day, he who has his day performs. Of course he is very disappointed. People’s job is to talk, but our job is to encourage what we are giving. , At the same time, Matthew Wade himself said about this, “I don’t think missing my catch was the turning point. I think we needed 12 or 14 runs at that time. The match seems to have started turning in our favor at that time. If I got out then we don’t know for sure what would have happened, but I was sure that Pat Cummins would have come to the crease and lead the team to victory along with Marcus Stoinis. ,

It is noteworthy that in the last 12 balls of the match, Australia needed 22 runs to win. Fast bowler Shaheen Afridi came to bowl the 19th over and on the third ball, Matthew Wade hit a big shot at deep mid-wicket. The ball was in the air and Hasan Ali ran after chasing the ball. Earlier, Hasan Ali had spent 15 runs in his last over as well. He had conceded 44 runs in his total quota of 4 overs. 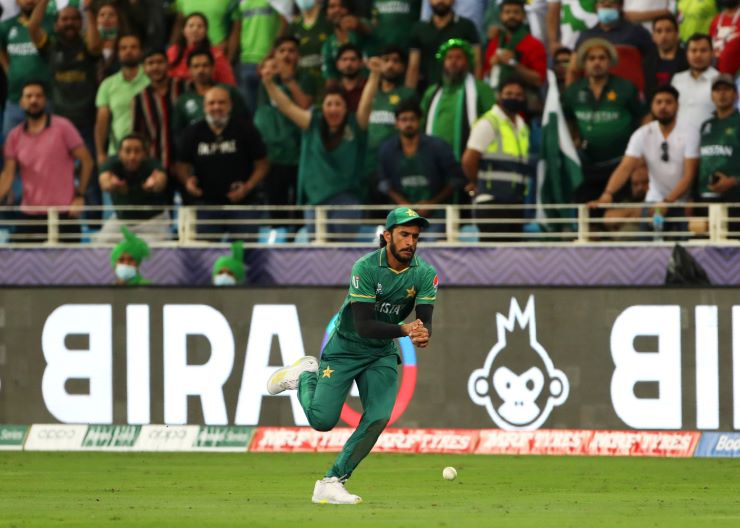 Pakistani fans were hoping that by catching this catch he would ease the way for Pakistan to win, but it did not happen. Hassan dropped the catch, which ended Pakistan’s hopes of victory. Wade took two runs off that ball and then smashed three consecutive sixes in the next three balls to snatch victory from the hands of Pakistan.