After all, Australia won the first T20 World Cup, from cricketers to fans congratulated

When the 90s was coming to an end, a team was emerging which needed skill to defeat, but luck was also needed on that day. Apart from this, some umpire’s wrong decisions. If one of these things is not there then this team cannot be defeated. The name of that team was Australia.

It is too early to say whether Australia will become the same old team after defeating New Zealand in the T20 World Cup, but Finch’s team showed a glimpse of that old Australia.

After the great players, Australia also won the 2015 ODI World Cup before this but it was played in home conditions. For this reason, today’s victory is being described as bigger than that victory for Australia.

After this victory of Australia, all the cricket fans around the world on Twitter congratulated the Australian team in a funny way. Apart from this, former and present cricketers also congratulated Australia.

Many Congratulations to Team Australia for such a brilliant performance and winning the ICC T20 trophy! #AUSvNZ #T20WorldCupFinal

Tremendous final, some terrific batting! Williamson played one of the all-time classics, but Warner and Marsh were just unstoppable! Congratulations to Australia on their maiden triumph, New Zealand have nothing to be ashamed of. #T20WorldCup

Congratulations to Australia on winning the @T20WorldCup I must admit I didn’t see them being the champion team this tournament. But they’ve silently gone under the radar and came up with the goods every time. Well Played Australia #ICCT20WC

High time to say that we are the greatest team in cricket history!! #Australia pic.twitter.com/7u92op6Pw1

This Australian Team is not same anymore after 2007 Worldcup.

Of course Australia has played very well, but we are less bitter about them winning the world cup this time because they have kicked Paxtan out of the tournament. #PKMKB #AusVsNZ #T20WorldCup

Missing added to the cabinet – #Australia are the champions of the ICC Men’s #T20WorldCup 2021! #NZvAUS pic.twitter.com/Bn87NAxoq4

Brilliant half-centuries from Mitchell Marsh (77 not out) and David Warner (53) helped Australia beat New Zealand by eight wickets in a one-sided fashion on Sunday to become champions of the T20 World Cup for the first time.

New Zealand scored a challenging 172 for four in 20 overs in the final of the T20 World Cup on Sunday with captain Kane Williamson’s 85-run captaincy while Australia clinched the title with 173 for two in 18.5 overs. . Chasing the target, Australia lost their captain Aaron Finch for 15 runs. Finch could score only five runs, but after that Warner and Marsh shared a 92-run partnership for the second wicket to lead the team to victory.

Earlier, playing first after losing the toss, Williamson remained at one end with the help of 10 fours and three sixes in 48 balls with the best innings of 85 runs and Marlon Samuels of West Indies was unbeaten in the final of the 2016 T20 World Cup. Equals the best score of 85 runs. 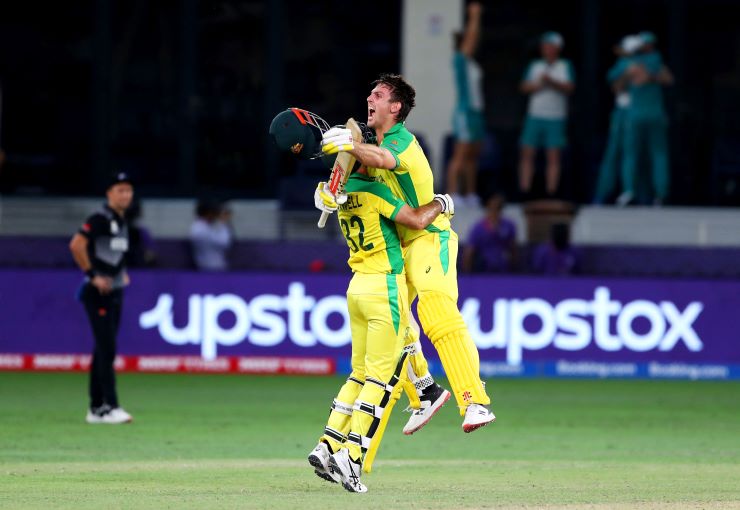 The Kiwi captain scored only 18 runs in 19 balls in the first 10 overs but after that he sharpened his temper, hitting 67 runs in 29 balls. Williamson scored 22 runs in the 16th over of Mitchell Starc’s innings, hitting four fours and a six. He was dismissed as the fourth batsman by Josh Hazlewood in the fifth ball of the 18th over. Hazlewood took three wickets for just 16 runs in four overs.